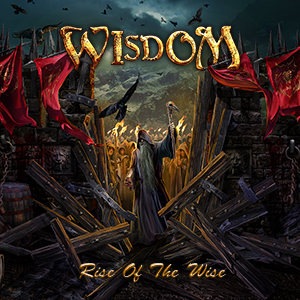 Many people within the walls of the empire lived in fear of it. Although they heard WISEMAN's call they never had enough courage to go search for him in the depths of the mystic forest. Only when they learned that the old leader and his followers were marching towards the evil oppressors in unity to strike down the powers of the dark forces, did they start a secret movement from within. With the help of the loyal ravens they were able to communicate with WISEMAN to enable their plan to attack simultaneously from both inside the walls as well as from the outside at the same time. They believed when the show of force began, more and more renegades will join them whose hearts were filled with passion.
With great tension and hope, the Rise Of The Wise against the tyrants was at hand. When all conditions were right the ravens brought the final sign. On this Ravens' Night, as it was later named, WISEMAN and his followers broke through the walls of the empire. All the rebels from inside came out from their hiding places as well. The long awaited attack, which could finally bring justice after the long oppressive tyranny, had begun...


Over The Wall
Music: G. Kovacs

Ravens' Night
Music: G. Kovacs, Lyrics: M. Molnar
"Who knocks here? Who knocks here? It is the raven black:
In its beak is the note, or one like it, brought back."
/JANOS ARANY/

Ravens' night is the name of our last fight
Evening falls here we are to break down the walls
We will fight hard until we die
Ravens, give us the sign!

Where should I go, oh what can I do?
I want to know just like you

I wonder how frail I am
Remember how I was a blind man
Pretender, no Im not a fake
My feelings poison me like a snake

Hunting The Night
Music: G. Kovacs, Lyrics: M. Molnar
"The werewolves are certain sorcerers, who having anointed their bodies, with an ointment which they make by the instinct of the devil; and putting on a certain enchanted girdle, do not only unto the view of others seem as wolves, but to their own thinking have both the shape and the nature of wolves, so long as they wear the said girdle; and they do dispose themselves as very wolves in worrying and killing, and eating most of human creatures."
/RICHARD VERSTEGAN/

Hero
Music: G. Kovacs, Lyrics: M. Molnar
"Heroism is the brilliant triumph of the soul over the flesh that is to say over fear: fear of poverty, of suffering, of calumny, of illness, of loneliness and of death."
/HENRI FREDERIC AMIEL/

Hero, creature of war
Glorious forevermore
Hero, king of the field
His name is feared

Soldiers of victory celebrating and
Praising the bravest man

Hero, creature of war
Fearless and brave to the core
Hero, keeper of faith
No question he never fails

Hero, creature of war
Glorious forevermore
Hero, king of the field
His name is feared

Hail the hero
Praise the hero

See the world in another way
Life is more than pain

Have you ever tried to make a change
Whenever you feel alone?
Now I think it's time to break your chains
Like I did it on my own

Road to nowhere I'm on my way
Feeling higher day after day
I will never, never return
Let the fire burn

Nightmare Of The Seas
Music: M. Molnar, Lyrics: M. Molnar
"Damnation seize my soul if I give you quarters, or take any from you."
/EDWARD TEACH/

Father, the wind has cold embrace
I let his fingers guide my sails
Where there is something to be done
He will never let me down

Believe In Me
Music: G. Kovacs, Lyrics: M. Molnar
"Never do anything when you are in a temper, for you will do everything wrong."
/BALTASAR GRACIAN/


Outside the window, I see the moon
Gives little silver light in the gloom
No breath of wind, no rise in the ground
Only my thoughts are whirling around

Still many times I lose control
I am just like the man I don't wanna be
Give me a final chance, one more
You can trust and believe in me

Face in the mirror, seems like he cries
I look into his desperate eyes
Try to deny what sanity tells
Whether its me or somebody else?

Trust and believe in me

You say with evil irony this is just fantasy
What if you free your mind and try to see?

Waiting just waiting for honour and glory
No more I can do let me say I'm sorry
Hoping just hoping that fame will come for me
That's all I can do, welcome to my story

Rise Of The Wise
Music: G. Kovacs, Lyrics: M. Molnar
"Awake, arise or be for ever fall'n."
/JOHN MILTON/


One justice, one wisdom, one night of glory and pride
We're fighting for freedom until we die

Inside this evil empire where I live
The bloody walls are the dark signs of tyranny
They took my freedom, soldiers are all around
Who rise against them is forced to the ground

Come on make your choice there's no more time to waste
Join us and break your chains; freedom awaits

Now we hear the ravens' sign, see the falling walls
Revolution the sole solution is here we must go forth
Now or never lets fight together against the evil force