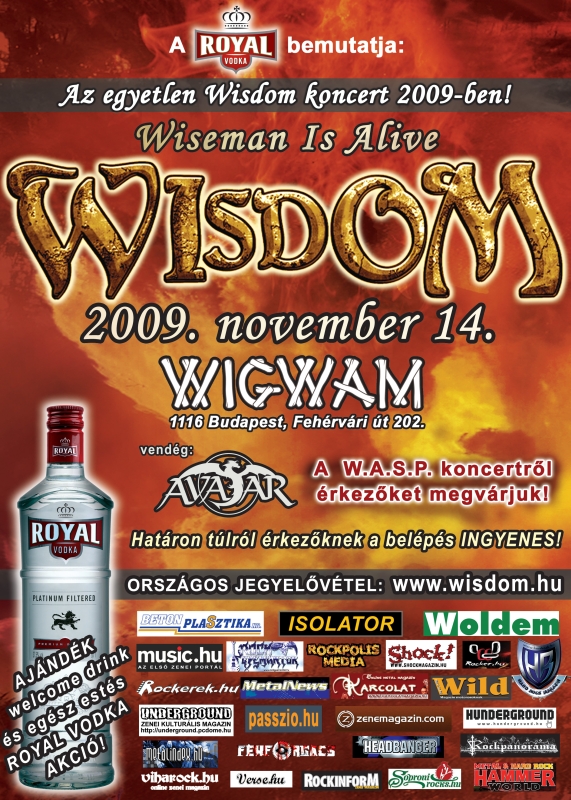 The fourth Keep Wiseman Alive show was held on the 14th of November 2009 in Club202, Budapest, Hungary, in the former Wigwam Rock Club.
This was the only Wisdom concert of the year and it was promoted with a new name "Wiseman Is Alive" reporting to the fans that despite of the inactive year the band is still alive and they have plans for the near future.

The Keep Wiseman Alive show in 2008 was cancelled because the band couldn't find the right frontman to replace Istvan Nachladal. After a year of searching for the new vocalist, things turned into a better direction and they decided to give a sign of life to the audience and let them know about they are ready to roll again soon.
As a seal to the past they played a three hour long show. The first half of the concert was performed by the bands original singer Istvan Nachladal and the second half by Zoltan Kiss, who helped them out after Istvan Nachladal's quit in 2007. There was a change behind the drumkit too, Balazs Agota replaced Peter Kern who couldn't continue his musical career due to his health problems.
Almost all Wisdom songs have been performed on this special Keep Wiseman Alive as well as all cover songs they have ever played live.
There were no special decorations used on this event, because they put the main emphasis on the songs and on the performance.

The guest bands were Tristana from Slovakia, and Avatar from Budapest, Hungary.